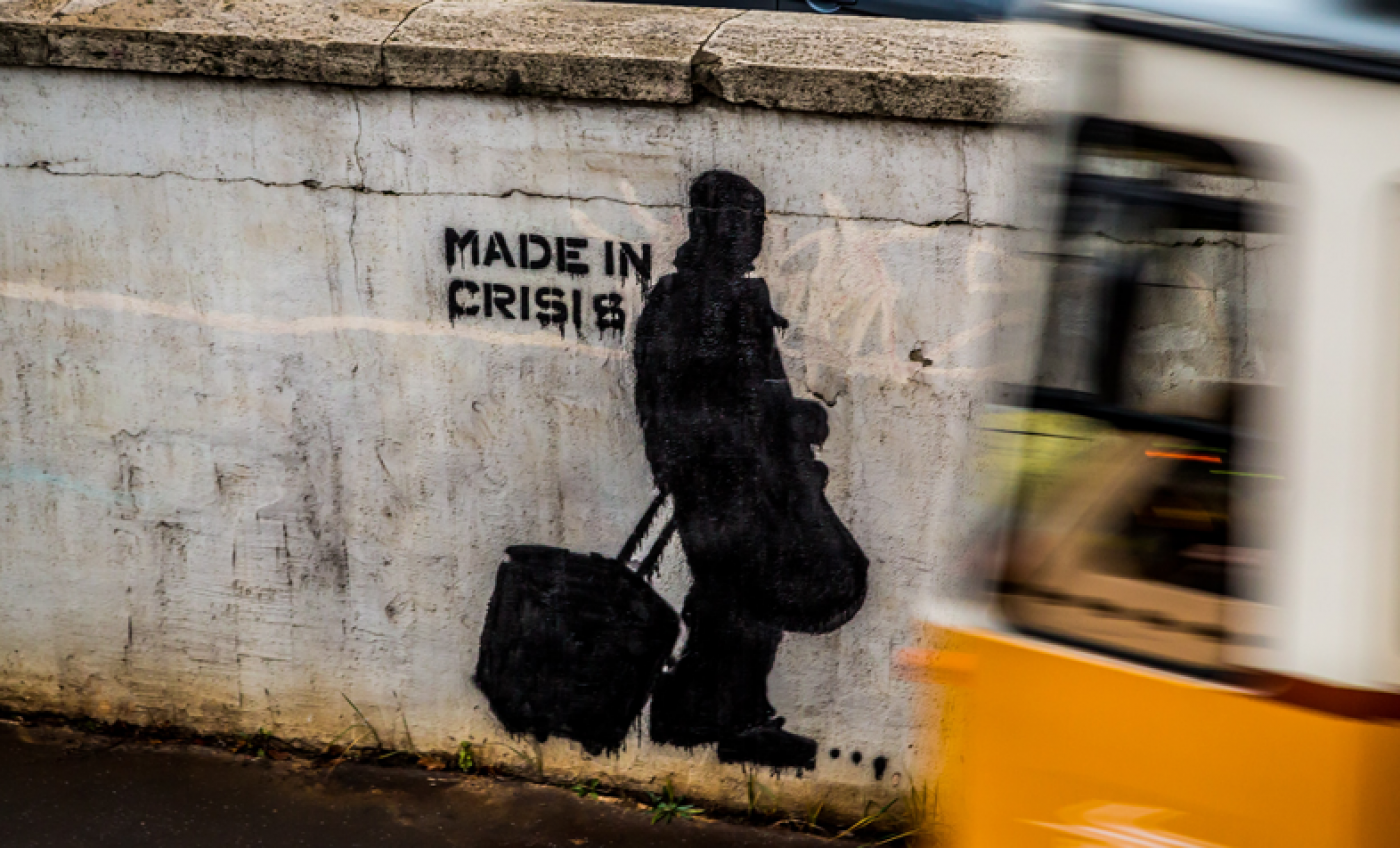 Many brands have frozen their marketing budgets and halted communication during the COVID-19 pandemic. Unprecedented times require unprecedented measures. However, is silence the best response?

By definition, a crisis results in the destabilization of established certainties such as fundamental rights to safety and protection, freedom of movement, and a myriad of other assumed understandings that help us navigate this interconnected world and the intricate social structures we have built.

The information age has allowed us to be updated on developments worldwide in real-time. We are graphically exposed to gruesome details of terrorist attacks in Asia, to spectacular volcanic eruptions in Iceland, and to deadly Ebola outbreaks in Africa. Nevertheless, unless one is directly affected by a crisis, the destabilizing effects are mostly impersonally observed from a distance.

The last nonwar crisis that affected the whole of Austria was the 1918 influenza pandemic. Because Austria was simultaneously coping with its imminent defeat in WWI and the disintegration of the monarchy, the response was slow and restrained. Eventually, most schools were closed, as well as venues such as theaters and cinemas. In Vienna, people were advised not to visit cemeteries, and public transportation was reduced to prevent large gatherings and the spread of infection.

The governmental response to the COVID-19 pandemic has been substantially more extensive. The Austrian authorities began imposing restrictions relatively soon after the first infection cases were registered. Recommendations on washing hands, disinfection and keeping social distance were released rather swiftly. Borders were closed and large gatherings forbidden. Soon after, a full lock-down was imposed: schools closed, universities closed, all shops that did not provide for basic needs closed, people were ordered to stay home except for certain limited exceptions. Two months later the restrictions were eased after a relatively low level of confirmed infections and deaths, and new rules were imposed that required people to wear face masks when entering shops and public transportation.

Whilst all this was happening, most brands stayed conspicuously silent. Marketing managers promptly had their budgets frozen and were forcibly pushed into short-time work. Event managers were made redundant. Of course, extraordinary times require extraordinary measures. Brands are excessively cautious anyway in their communication, this pandemic just added to that. There was a quick realization that original marketing plans had become inexecutable. Most marketing directors took the “better safe than sorry” approach. Events were cancelled and sponsorships were swiftly retracted. The loyal brand consumer and partners were largely abandoned and left to wonder about their beloved brand.

A few brands posted generic “thank you” notes on social media channels. Others trickled on with the normal brand glorifying advertisements, ignoring the enfolding crisis. A scattering of brands started to produce face masks and disinfection liquids, which showed a genuine desire to make a substantial positive contribution. However, most of those efforts turned out to be a singular brand action that was subsequently rehashed or forgotten. Very few brands active in Austria embraced the challenging exceptional situation and found creative and innovative ways to connect with the consumer without seeming oblivious, insensitive (tone-deaf), or opportunistic. It must of course be noted that most large international brands in Austria are controlled from especially Germany, because Austria is considered to only be a small part of the German-speaking world. This makes marketing customized to the Austrian market more difficult, as many authorizations must always come from abroad. Also, without a crisis action plan, it can be difficult for brands to know how to respond and the focus unsurprisingly turns to sales and profit.

However, all crises eventually end. When that happens, the brands that stayed silent or oblivious will be scrambling to try and re-position themselves, whilst the brands that were able to convey a positive image will be in the minds of the consumer. Such a positive image can be formed by bringing genuine added value to the consumer and by supporting and improving universal issues that are important to the public. A substantial body of research shows that Corporate Social Responsibility (CSR) in marketing plays a positive role in how consumers perceive and appreciate brands and products. Last year’s CSR-Monitor conducted by Growth from Knowledge, concluded that 78% of Austrians perceive CSR to be very important. According to a significant survey conducted in Austria by Statista after the lock-down was imposed, 62% of respondents wanted to see brand communication that shows the CSR of the brand.

In Austria, a number of brands have made a notable marketing effort during the crisis.

Live Nation supports where it matters.
The live-entertainment company has been among the hardest-hit in the crisis, but has not let its fans down by disappearing from view. After an unusual mid-March social media communication break, it came back with daily up-dates, informative posts, letters of support, and launching “Live From Home”: daily live streams and exclusives. Furthermore, it started a substantial global relief fund (Crew Nation) with $10 million to support the many unemployed crew members. All this was communicated amply on its global social media accounts as well as on its German speaking accounts. Live Nation proved itself to be a real support and resource to both its multitude of fans and the crew members who are the backbone of all live-events.

Bacardi has been raising its spirits.
Bacardi was very fast in its global response to the COVID-19 pandemic crisis by shifting a part of its rum production to supply materials to make and donate hand sanitizers to local communities worldwide. With the emphasis on being a family company, it also quickly pledged a large sum of money to help friends and partners in the bar and restaurant industry. These applaudable contributions were visibly shared on its global social media channels, but subsequent brand worthy efforts such as teaming up with Punch to “Tip Your Bartender”, hosting a live-streamed dance class with Ashley Roberts, and pairing up with Piso 21 to create a charity live concert, were only locally promoted. The Austrian social media channels were wretchedly empty. Instead of 15 posts on Facebook (Austria) in March and April 2019, there were merely 5 this year. Only on LinkedIn, which does not have global pages, could one get an overview of the brand developments during the crises.

Spotify did not forget where its content comes from.
The Swedish music-streaming giant gained many new subscribers during the crisis and did not disappoint fans with its response. It remained very visible on its global and German language communication channels with frequent posts and updates, and in mid-April it announced the creation of the COVID-19 Music Relief fund. The fund was created to support the global music community in the unprecedented crisis. Spotify pledged to match all donations made to the fund dollar for dollar up to a collective total of $10 million. In addition, Spotify also made contributions to public health organizations and donated ad inventory and platform space to share news and health information with its users. The brand was able to make substantial and relevant contributions and support to its community and beyond.

Whilst these examples show the encouraging response of large multinational corporations with a large marketing and social media focus, there are also positive examples of smaller local and more niche companies active in Austria.

IBIT and allbuyone know that together means stronger.
The German event supply company with a large presence in Austria, quickly established an extremely useful COVID-19 information blog in cooperation with the International Training Centre for Crowd & Safety Management (IBIT). The dedicated blog provided a much-needed information source for the hard-hit event industry in the German speaking world. Customers and partners were kept up-to-date via email with information and offers. Furthermore, allbuyone also initiated the “all4one” effort, in which the company pooled together its network of event industry partners in order to offer their services to a wider audience. These partners, that were normally active in the event industry, were given a platform to offer their expertise in safety and crowd control to help for instance supermarkets and shops with their urgent new needs.

Stiegl has good intentions.
The Austrian beer brewing company Stiegl is one of the brands that remained active on its social media channels with product updates, thank you notes, and even a horse and carriage beer delivery service. A noteworthy effort was also made for a more substantial contribution by starting a virtual tip jar for gastronomy partners. The brewery pledged to give €1 for every crate of beer sold on the Stiegl online shop. Even though the idea was well intentioned, the tip jar never even hit €1.000, because it lacked effective communication and convincing effort. This comes to show that such initiatives need a well-coordinated and intensive communication effort, and a real and visible benefit for the people donating.

Vorfreude.kaufen: the missed brand opportunity
Vorfreude.kaufen is a not-for-profit initiative started by three private individuals who wanted to support the gastronomy sector during the pandemic. On the platform, users can buy a consumption voucher for their favorite restaurants and bars. The much-needed unbureaucratic direct cash injection has provided numerous struggling businesses a little help with paying the bills. Vorfreude.kaufen quickly established an incredibly positive image with its genuine incentive to help without expecting anything back. Even though the initiate was supported by a number of brands, it is surprising that a similar project was not initiated by a local brand or that it was not more substantially supported by one.

Brands set themselves up for long-term loyalty, by providing genuine and substantial benefits, messages, and support. In Austria, numerous brands have tried to stay in touch with their audience and made efforts to provide genuine support. However, it seems clear that isolated efforts that do not form part of a more substantial and permanent active role in supporting and improving universal issues that are important to the public, are soon forgotten. In a crisis situation, marketers and brands must be willing to take risks and not shy away from communicating in order to build a lasting positive brand perception. With media consumption rising during the COVID-19 pandemic, frozen marketing budgets resulted in consumers and brand partners feeling abandoned, brand awareness being lost, and brands finding themselves in a less believable position when they did start to communicate again. Brands that focus on building long term brand values in radically changing environments, are generally the ones that come out on top.